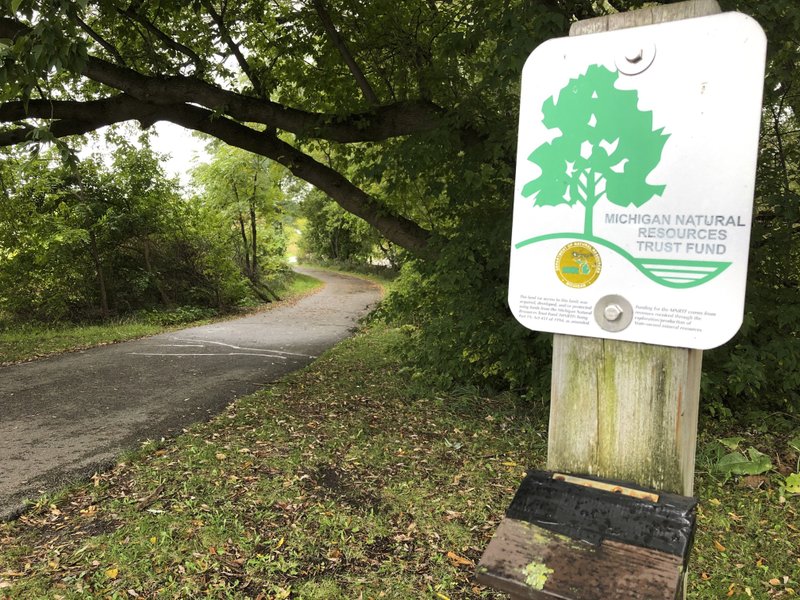 A view of a portion of the Boardman Lake Trail is seen Saturday, Oct. 3, 2020, in Traverse City, Mich. The trail is among many that have received financial support from the Michigan Natural Resources Trust Fund, which comes from royalties paid by developers of state-owned minerals such as oil and gas. Voters on Nov. 3 will consider a ballot proposal to change rules that determine how much of the money is spent on land purchases and how much on development projects such as trails and boat launches. (AP Photo/John Flesher)

TRAVERSE CITY, Mich. (AP) — Michigan voters will decide next month whether to change how money can be spent under a popular program that buys land for public use and supports projects such as construction of trails, playgrounds and boat launches.

More than $1.2 billion has been distributed since the fund was established in 1976. Last year’s awards ranged from $49,000 to improve a floating boardwalk in Munising Township to $2.7 million for a non-motorized pathway in Detroit.

Under rules governing how the money is parceled out, about three-quarters has been spent on land purchases. A proposal on the Nov. 3 election ballot would alter the formula, potentially giving a greater share to development projects. It also could pump more money into the fund, although not immediately.

The measure, known as Proposal 1, is backed by an array of conservation and business groups. But it has divided environmental activists, with opponents arguing that protecting land should remain the program’s top priority.

“One of the things that make Michigan a wonderful state is all the public land we’ve got,” said Marvin Roberson, a forest ecologist with the Sierra Club. “I’ve got friends in Ohio who say they’d kill to have the public lands that we have.”

Supporters agree the state should continue buying scenic and ecologically valuable parcels, but say it’s just as important to fund the playgrounds, fishing platforms, restrooms and parking lots that draw people to the outdoors.

Some in southeastern Michigan wait in line for hours to launch boats onto Lake St. Clair because there aren’t enough ramps, said Jonathan Jarosz, executive director of Heart of the Lakes, a coalition of land conservancies.

“That’s the kind of access that park development allows for,” he said. “How people get out and enjoy the land and waters is what raises their ethic to care about these things.”

A board appointed by the governor considers proposals from around the state and compiles annual lists of trust fund grants for legislative approval.

Under the present system, at least 25% of the money spent in any given year must go toward land purchases, while no more than 25% can be devoted to developing recreation facilities.

Proposal 1 would require that both get at least 25%.

The board would decide how to spend the rest, as it does now. It’s typically been used for land buys and administrative costs such as reimbursing local governments for tax revenue lost when the state acquires property in their jurisdiction. Under the new system, some also could go toward development projects.

The trust fund is capped at $500 million and the amount available for grants each year depends on how much interest is earned. Since 2011, excess royalty payments have been deposited into a second endowment fund for state parks that totaled $282.7 million at the end of last year.

Under Proposal 1, after the state park fund reaches $800 million, the cap on the trust fund would be removed and it could grow bigger than $500 million. That would provide even more money for land buys as well as development projects, although it might take years to happen.

Another provision would require that at least 20% of the park fund be used for capital improvements like replacing shower houses or building new campgrounds, as opposed to daily operations.

“We want to build something with some of that money,” said Rich Bowman, state policy director for The Nature Conservancy. “We don’t want to use all of it to mow laws and empty trash cans.”

More than 30 environmental and conservation organizations support the measure, along with business groups including the Michigan Farm Bureau, several chambers of commerce and tourism organizations, said Becca Maher, manager of a campaign called Vote Yes for MI Water, Wildlife & Parks.

They say the proposal would improve the system and prevent future legislatures from diverting royalty payments to uses having nothing to do with natural resources.

It needs voter approval because it would amend the state constitution.

“It doesn’t fundamentally change the trust fund, just tweaks it,” Bowman said. “The fund is broadly supported. It’s provided over $1 billion for lands and facilities without a penny of state taxpayer money.”

Opponents say there are ways to raise money for trails and parks without reducing the amount used to buy land.

“Once a big parcel gets subdivided and developed, our opportunity to acquire it is gone forever,” said Roberson, of the Sierra Club.